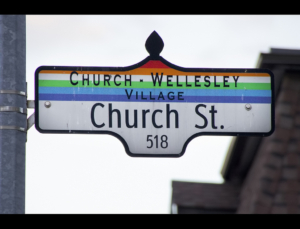 Grace MacInnis Co-op is located in downtown Toronto in the Church-Yonge Corridor. The co-op is just north of the Church-Wellesley Village, home to Canada’s largest LGBTQ2S+ neighbourhood. The area is home to a wide variety of organisations and businesses, grocery stores and restaurants, health services and entertainment venues, making the neighbourhood incredibly vibrant and walkable.

The Church-Wellesley Village has a long history dating back to when Scottish merchant and magistrate Alexander Wood purchased 25 acres of land where the area now sits. Since then, those lands were sold and developed and have seen many changes from a chic 19th-century neighbourhood, to a strip of rooming-houses during the Depression, to home of Toronto’s first high rise apartment building in the 1950’s.

It’s been since the 1960’s that our neighbourhood developed its current character as home to Canada’s largest LGBTQ2S+ community. The neighbourhood has played important parts in Canada’s human rights history (the 1981 Bath House Raids), appeared in cultural milestones such as The Kids in the Hall and Queer as Folk, and even houses the Canadian Lesbian and Gay Archives and the world’s oldest surviving LGBTQ2S+ bookstore, Glad Day Bookshop. 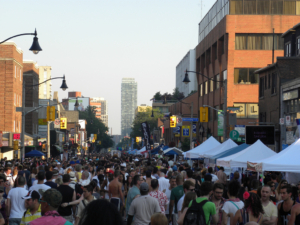 The Village, as it’s casually known, is also a central location for Pride Toronto’s annual festival each June. During the festival’s final weekend, the entire area is closed to traffic for free outdoor concerts & performances, celebrations, and information booths. It’s one of the largest Pride festivals in the entire world, attracting over one million people to celebrate.

Today, the Church-Wellesley Village is home to a diverse community of Torontonians from all backgrounds and walks-of-life and the Grace MacInnis Co-operative is proud to be part of this legacy.

Some of the above information was collected from a combination of the “Church and Wellesley“ Wikipedia entry and the BlogTO post “A brief history of the Church-Wellesley Village.” 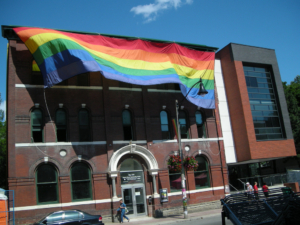 Helpful Organisations in the Neighbourhood

Church Wellesley Neighbourhood Association
The CWNA maintains a community newsletter, updates a calendar of neighbourhood events, and keeps a map with information on developments in the Church-Wellesley neighbourhood.

Wellesley Community Centre
Our nearest community centre offers a selection of free programming for arts, fitness, sport leagues, and other areas of interest. It also has free drop-in programs including weight room access, games for youth, and drop-in sports opportunities.

The 519
The 519 is a prominent local organisation in the Church-Wellesley Village dedicated to the LGBTQ2S+ community in Toronto. They offer free space for individuals and community organisations and host a wide variety of inclusive programming for the community in areas including arts & culture, community support, family and youth programming, elders groups, sport and recreation, and many others.